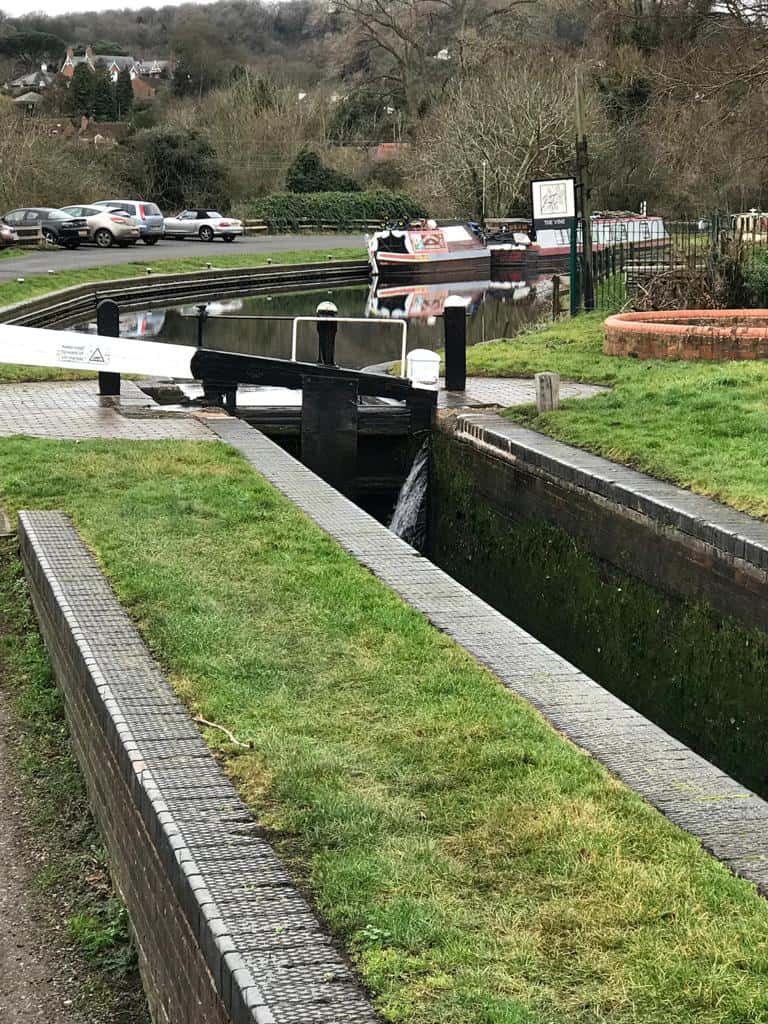 The canal, known locally as the ‘Staffs & Worcs,’ was a major route during the canal era, and would have been clogged with coal boats at all times. It is now connected to two cruising rings and is one of the most beautiful ways to see the region.

At the historic Stourport Basins in the Georgian town of Stourport, it connects to the River Severn on one end. The canal’s southern reaches run alongside the River Stour, an important wetland habitat. Unusual sandstone ‘cliffs’ line the canal between Kidderminster and Kinver.

It runs through the wild pine woods and heathland of Cannock Chase in Staffordshire at its northern end. Before joining the Trent & Mersey Canal, it passes through the grounds of the grand Shugborough Estate.

The glassmaking industry has a special relationship with the Stourbridge Canal. There were once over 20 glassworks in this area, which was known for cameo glass and cut crystal around the world.

Today, the Red House Glass Cone is one of only four glass-making cones left in the United Kingdom. You can watch glassblowing demonstrations, explore the underground tunnels, and learn about the area’s industrial history.

The cone is located next to the lovely Stourbridge 16 lock flight, which is set in leafy surroundings and features an iron split bridge, a charming lock cottage, and a timber warehouse alongside the canal basin.

The Stourbridge Canal’s towpath has been resurfaced, making it easy to walk the entire five-mile length.

The Worcester & Birmingham Canal runs from Birmingham’s vibrant city centre through Worcestershire’s green hills to Worcester’s cathedral city.
The canal joins the Birmingham Canal Main Line at Gas Street Basin at its northern end. This lovely basin used to be a bustling transportation hub. Modern bars and restaurants coexist with traditional narrowboats and elegant black and white iron footbridges. The Mailbox, a luxury shopping centre with stylish clothing shops and cafes, is close by.

Chocolate crumb to the Cadbury factory was once one of the cargos that travelled on the canal. Cadbury World is open today, and it’s a great place to visit if you have a sweet tooth.

Day out on the canal

To enjoy our canals, you don’t need a week off or a lot of sunshine. Visiting the canals is a great way to unwind, and there are plenty of places and activities for the whole family and friends to enjoy for a day or just a few hours, with many of them open all year.

A variety of canalside attractions, visitor centres, and waterways museums make for a fun day out for the whole family. Staying in a canalside cottage or houseboat can also provide a unique canal vacation with plenty to do. Day rental of self-drive vehicle Canal boats are a popular way to spend a day with friends while also getting a taste of canals and canal boat rental. Skippered trip boats offer short scheduled cruises that last an hour or two and can be joined on the spot, as well as chartered cruises that can be reserved in advance for a large group. The majority of restaurant boats combine good food with a canal cruise. And whether you’ve been boating or not, canal pubs are a great place to unwind with friends.

Days out along the Worcester Canal

The Worcester & Birmingham Canal meets the magnificent River Severn at Diglis Basin. It’s a great place to start exploring the canal and river, and it’s right on the edge of Worcester’s city limits.

Take a leisurely stroll around Diglis Marina and Worcester Dry Dock after your Sunday lunch before exploring the rest of this wonderful riverside city.
There are no picnic areas in Diglis Basin, but there are several along the riverbank on the way to the cathedral.

Wildlife spotting: Keep an eye out for the local swans, ducks, and moorhens, but don’t feed them bread!

Life of the canal.

Subsidence has ever been an important problem because of mining activities. Subsidence from coal mining proved to be a considerable issue for a lot of the life of the canal. The top layer of the path through the tunnel is quite patchy, on both the entrances to the tunnel there are a few rough patches, in addition, there are patches of the towpath in which you believe that you’re in the canal itself, it’s that wet, the rest though is an absolute pleasure to cycle or walkthrough.